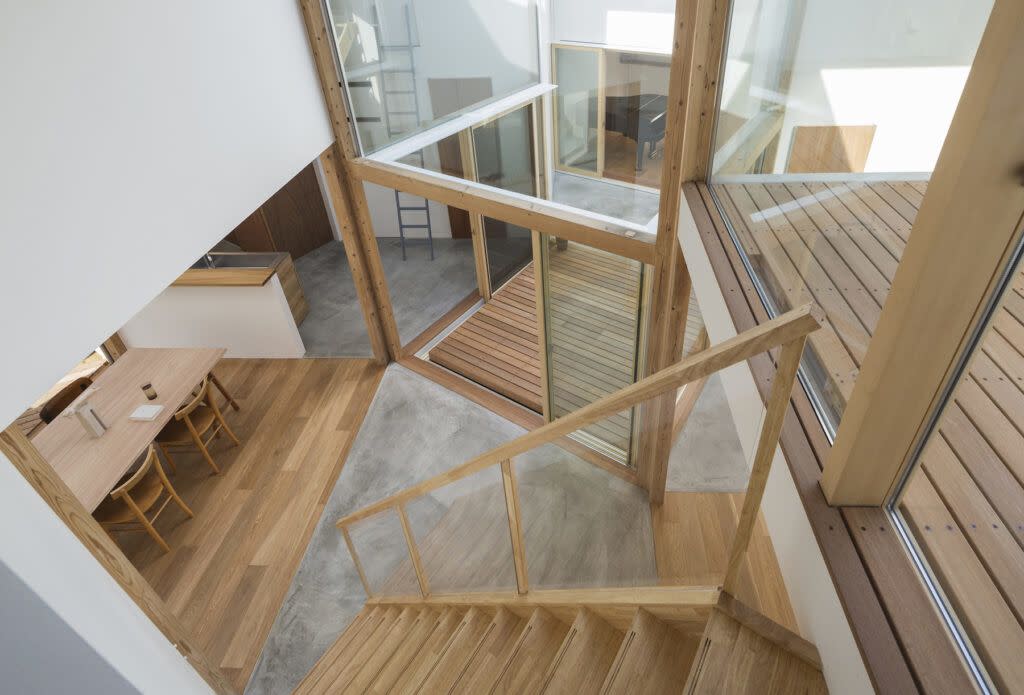 A modern tessellated house in Osaka

How do you create a house with many rooms on a small expanse of land without leaving the spaces feeling cramped and cut off from each other? The Japanese firm Tato Architects reveals an answer to that question with “House in Hokusetsu,” featuring a clever geometric floor plan that seems to endlessly multiply the amount of available space.

Mathematical models are all around us – they are not always immediately apparent. Take a closer look and you will see that everything from the petals of a wildflower to the arrangement of bricks in a wall has its own mathematical foundations. In the case of architecture, geometric patterns can make all the difference in the look and feel of a space.

Most buildings have standardized rectilinear floor plans, but this is not always the best approach. For this house in Osaka, lead architect Yo Shimada created a geometric mosaic pattern and then flared it slightly to make it a bit jagged, shaking it up and giving it a more vibrant feel. The result produces a multitude of spaces within the two-story house, all placed at angles to each other, the spaces between them being filled with skylights or left in the open to form small courses.

Customers asked for a home that would allow their family to enjoy each other’s company, but also many small spaces for individual activities. The architects explain that they literally wanted to think outside the box for this project – or at least overturn the way a box is typically used. As we slightly turn the corners where the walls intersect, they say, our spatial awareness suddenly becomes complicated, making us feel like the limited space has widened considerably.

Mathematics helped architects reach this conclusion. They started by experimenting with scale models, taking twelve squares of 2.895 millimeters and connecting them to each other with a rhombus made up of two triangles. Looking at the floor plan diagram, you can identify these twelve squares as rooms in the house – but by gradually rotating each one, the architects also introduced six interstitial spaces into the overall layout. These diamond areas have been left undefined for free use.

The team adds: “The structure is made of wood and each square plan is simply supported by pillars, which gives a peaceful interior despite its unique shape. The design of this house is similar in simplicity to the “cross inside a square” plan used in older houses. Each part, while representing a different quality, is also compatible and expandable, and it is possible that different circulations will emerge. This home is filled with self-contained spaces that can adapt to changes in lifestyle; it is a crystalline labyrinth where the spaces are repeatedly reflected in a prismatic figure.