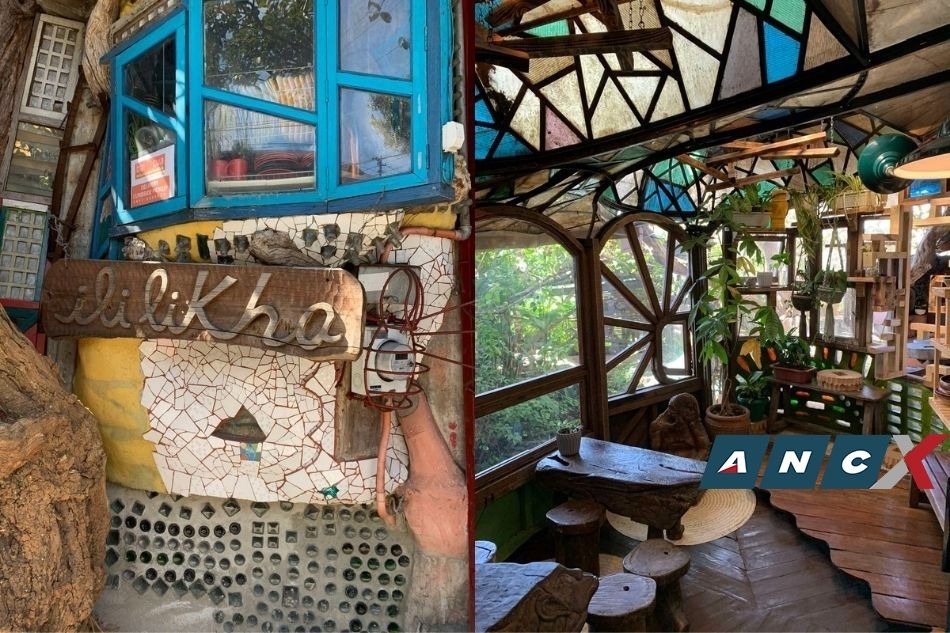 This architectural wonder of Baguio was built by a national artist, without a plan

By: Berta D. Carney
In: Architectural
With: 0 Comments

The whole building is a journey, in more than one way.

Kidlat Tahimik is known as a filmmaker and in fact received the National Artist Honor in 2018 for his contributions to Filipino cinema. But did you know that the director of “Parfumed Nightmare” can also make a building?

Well, not the type of building you have in mind. We’re talking about the kind of architectural curiosity where there’s something that grabs your attention with every step, whether you’re looking straight, turning your head down, or looking sideways. Something that at first glance is the first thing that comes to my mind: how the hell can you start building something like this?

Entering the artist village of Ili-likha on the Assumption Road of Baguio is like stepping into a maze or a mess, if you are only in square concrete structures. It is built around trees and assembled from a multitude of materials that are not necessarily recognized as the elements from which you construct buildings. Used windows and old TV frames make up the walls, as do old bottles of kuwatro kantos. Metal sculptures are used as walkway floors. Old bikes, colorful chairs, paintings, Rizal figurines, broken tiles, flags and Ifugao statues. All these elements complete the whole eclectic patchwork that is Ililikha. The whole building is a journey, in more than one way.

“Kidlat wanted to create an alternative platform for small artist stores, restaurants and the like,” explains Kawayan de Guia, one of Kidlat’s sons, himself an accomplished artist. “It was also going to house the” Cinémathèque du Nord “which is his tribute to Enrique De Malacca.”

Malacca is the Malaysian explorer considered the first person to tour the world (yes, before Magellan), and the cinema is Kidlat’s – he shows his films and the films of other independent directors. Those who have seen the space say that it is a work of art, “a church for the cinema”. It is located in the highest part of the Ili-likha structure, although it is difficult to say what is really up or down in this building, what the entrance is and the exit.

The entire complex was completed over a period of 10 years. For a decade this was a work in progress using a process Kidlat calls “pukpok tastas”. Many artists, Ifugao woodcarvers, artisans and craftsmen, including Kabunyan de Guia, Kawayan’s brother, contributed to the creation of the structure. Kaway says it’s his father’s attempt to project his alternative architecture, perspective, and lifestyle, which basically boils down to these words: “Get out of your way and find your sariling dwende.”

What is a dwende in the Kidlat universe? “It’s just something in you,” Kidlat said in an interview a few years ago, “that sees the world in a unique setting.”

According to Kawayan, the property of Ililikha belongs to the small family of Guia made up of his cousins ​​and aunts. “The family did not have a guarantee to build a larger structure, so Kidlat offered to take over the project using recycled materials such as bottles, wood reclaimed from typhoons, etc. “The process in which the project was carried out is similar to the way the national artist makes his films:” pakonti-konti … Pag may pera gawa, pag wala contemplate muna “.

And the whole thing had no plan, says Kaway, every step of its making being guided only by sensation and intuition. “His father was an engineer,” Kawayan explains, “and so in my opinion the structures he creates are almost a sign of rebellion against the straight, the flat and the steep. ”

We visited on a holiday so most of the shops are closed. But locals say Leandro’s serves great coffee, cheesecake, and carbonara, and Cueva Cafe has great rice meals. There is a corner that serves veggie dumplings, smoothies, and ginger beer. Kulaaw sells crafts and accessories, and Anthoniuz is a flower shop where the owner himself will create a bouquet for you, and not in such a cute way.

But you can also spend an entire afternoon hanging out: read a book from a selection stacked next to a job (just put it back on when you’re done), or take selfies (you’ll never run out of textured backgrounds), or just explore the entire building while paying close attention to how metal gives way to wood , which leads to the art flowing down the stairs. You’ll never know, somewhere in between you might find your duwende.